Lion Giovanni was born in Italy where he was was abused as a 'photo lion' on the beach and later on forced to perform in shows. Eventually he ended up in the Netherlands. Lioness Nora was abused as a circus animal and also ended up in the Netherlands. Both lions were brought to LIONSROCK Big Cat Sanctuary in South Africa, where they were successfully introduced to each other!

Giovanni was born in 2003, and for the first months of his life, he was abused as a 'photo cub' on Italian beaches. When he grew older, he was forced to perform in shows where unfortunately he lost his tail. He finally ended up in a rescue centre in the Netherlands, where life did not improve for him at first. When FOUR PAWS found him at the end of 2013, he was locked up in a small enclosure between other lions. He was a frustrated and extremely unhappy animal. After the take-over of the centre by FOUR PAWS, when it became FELIDA Big Cat Centre, six other lions moved to LIONSROCK and Giovanni was given space, time and care to relax more and feel more confident. This worked out and helped him develop positively into the happy lion he can be. At the end of 2015, FOUR PAWS had the opportunity to transfer Giovanni to spacious LIONSROCK, where he became a strong and self-assured lion.

Expelled from the pride

Just like Giovanni, Nora was born in 2003 yet in a Swiss zoo, together with her siblings Kongo and Neida. At the age of five months, they were brought to a German circus. For years, they were forced to perform in shows. Eventually, again just like Giovanni, also Nora (and her siblings) ended up in the rescue centre in the Netherlands. After the take-over of the centre by FOUR PAWS, Nora and her siblings belonged to the first six animals that made the transfer to LIONSROCK in the summer of 2014. There, the trio proved how stubborn cats can be: shortly after their arrival Nora was attacked by her siblings and later on expelled from the little pride. The team of LIONSROCK moved Nora to another enclosure where she met again with her old and now new neigbour: Giovanni.

Right from the beginning Giovanni started showing signs of interest in the beautiful lioness. Eventually, after living next to each other for a long time with a lot of positive interactions, the two lions were socialised on September 19th, 2018. Giovanni immediately was very protective over Nora and was, at the same time, both curious towards and scared of her tail. As he is missing his own tail since he was very young, this was completely new to him! Nora felt very confident from the first moment and his 'awkward' behaviour did not put her off at all. The love story still continues today as the lions happily live together. They were meant to be together. 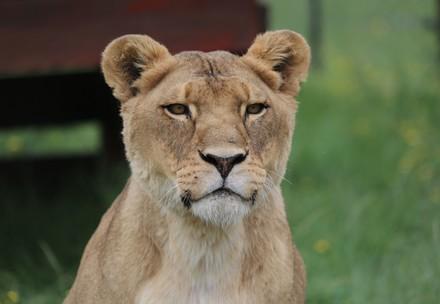 From zoo to circus to freedom 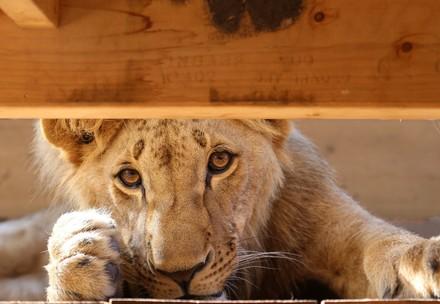