Masoud and Terez were born in September 2017 at the Razgrad Zoo, a zoo in Bulgaria that also functioned as an illegal breeding station for lions. The brothers are the result of inbreeding (both their parents and grandparents are siblings) and shortly after they were born, they were abandoned by their mother. There was a third cub, but unfortunately he passed away. Masoud and Terez were rescued just in time and arrived after a long journey to FELIDA in February 2018.

Shortly after Masoud and Terez were abandoned by their mother, they were taken to a veterinary clinic in the Bulgarian capital, Sofia. The two little cubs suffered from diarrhea, dehydration and respiratory problems. They were raised by hand to give them a chance at life: successfully! Meanwhile, the FOUR PAWS team started preparations to take them to FELIDA Big Cat Centre.

This was not without a struggle: the Bulgarian authorities did not initially authorise any transport. This led to an international protest: FOUR PAWS started a petition that was signed by supporters across the globe and Bulgarian animal lovers organised various protests on the street. Eventually, we received the green light on February 6, and the then 5-month-old cubs of only 20 kilos each travelled to Nijeberkoop, the Netherlands.

Growing up with trial and error

They have undergone many developments in FELIDA. Thanks to intensive and specialised care, the expertise of our wildlife veterinarians and the support of our donors, they have grown into two young adult lions weighing more than 120 kilos. They are still affectionately called "the cubs". Already upon arrival, Terez was the bravest one of the two. But he was also the weakest due to joint problems. However, he has become stronger over the years and begins every day, with a far-reaching roar, that he certainly is in no way inferior to the other lions at FELIDA. He loves enrichment – especially melons and pumpkins – and likes to play with Masoud and his uncle and neighbour Ivan-Asen. Although his way of walking will, due to neurological problems, never earn the ‘beauty price’, he is doing very well. On the other hand, Masoud, unfortunately, has more issues with his coordination and motor skills. He moves a lot and in this way, he has built up a healthy amount of muscle mass, but now that he is fully grown we see that his way of walking is lagging behind. In the near future, we therefore, will have to do more studies: Masoud needs an MRI and CT scan so we can analyse his bone growth. Following this, we are able to determine, together with our specialists, how to treat him further. 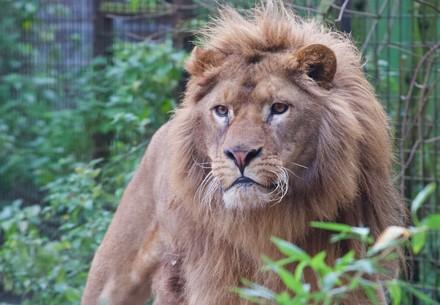 A difficult start for the King of Beasts 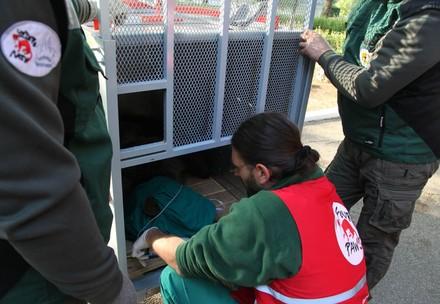 FOUR PAWS About Us