Ivan-Asen was born in 2014 at the Razgrad Zoo, a zoo in Bulgaria that also functioned as an illegal breeding station. He is the uncle Terez, because his parents are the grandparents of Terez. Ivan-Asen is the result of inbreeding and had a difficult start to life: when we rescued him, he was malnourished, dehydrated, emaciated and very anxious. He arrived at FELIDA in March 2018.

Ivan-Asen was born in the Bulgarian Razgrad Zoo but sold to another Bulgarian zoo shortly after. When this zoo discovered that Ivan-Asen had health problems, he was sent back to Razgrad. But Razgrad Zoo had no space for Ivan-Asen, so he languished in a dark, concrete cage full of faeces. He lived a lonely and hopeless life and his condition was getting worse and worse. He hardly saw any daylight, he was malnourished and dehydrated. Since he is the result of inbreeding, he also had problems with his spine and joints. He languished under the most terrible conditions imaginable for the king of beasts.

Thanks to an international petition, national protests and the financial support of our donors, we were able to rescue Ivan-Asen. Our rescue team worked tirelessly through the night on March 26th 2018, and on March 27th he had arrived. The journey was long — through Romania, Hungary, Austria, Germany and finally the Netherlands, to get to FELIDA Big Cat Centre. At the first daylight, he was released into his new enclosure.

This special lion is a good example of an animal that requires highly specialised and intensive care, due to his difficult past and the fact that he is the result of inbreeding. For example, sometimes Ivan-Asen experiences skin problems. Results from veterinarian check-ups showed no bacterial, viral or allergy-related problems. However, it was clear that Ivan-Asen has an ongoing issue with his immune system, which can lead to problems with his skin and other organs: his kidneys have also begun to deteriorate a little. We provide Ivan-Asen with medication to help him with his physical problems and this is currently having a positive outcome. Ivan-Asen will always require intensive care and sadly may have some moments that his immune system will cause him some discomfort. But we are grateful for the many beautiful moments, the fact that he clearly enjoys his life and that he loves to play with his nephew and neighbour Terez. 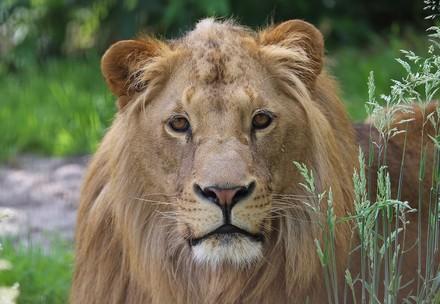 From cub to adult lion