Big cats are legally and illegally traded worldwide, including tigers and lions. According to FOUR PAWS International a live tiger is worth about € 22,000, a kilo of tiger bones is available for about € 1,700 and a litre of tiger wine - an allegedly medicinal broth of tiger bones - can be bought on the black market for € 85. This trade is driven by the production of traditional Asian medicine. It was already common knowledge that Asia plays a major role in this trade, but more recently it became apparent that Europe is involved as well.

In some European countries it is possible to rent tigers for private parties.

Anyone can buy or sell a tiger

In recent years (2014 - 2018), a total of 43 live tigers have been imported and 181 exported by EU Member States, including to countries such as China and Vietnam, where there is still demand for traditional medicines made from tigers. The most remarkable thing about this data is that it is completely legal! You cannot trade tigers from the wild, but unfortunately, you can trade captive-bred tigers; with the right permits, anyone can buy or sell a captive-bred tiger. Recent investigations by FOUR PAWS have shown that the Netherlands have even issued licenses for the export to China of 15 tiger skins, 10 dead tigers and 1 trophy for commercial purposes! And it could be even worse because legal trade is often also a cover for illegal activities. Between 2014 - 2018, 1,804 illegal tiger products (such as tiger broth cubes, teeth and nails) and 18 tigers were seized as a result of, among other things, poor living conditions or falsified papers. The horrific and lucrative tiger trade is widespread, with evidence of illegal activity in countries such as the Netherlands, Belgium, Germany, France, Spain, Italy, the United Kingdom and the Czech Republic.

During raids near Prague in July 2018, the Czech authorities discovered a dead tiger and tiger bones, tiger broth and other tiger products. In order not to damage the fur, the arrested suspects killed the animals with a bullet in their eyes. One of the suspects is a well-known owner of a zoo who is active in the trade of tigers to Asia. When the Czech authorities launched raids on the Vietnamese Sapa Market in Prague, it was found that tiger meat products were offered there for sale.

The findings in the Czech Republic are no isolated cases. Research by FOUR PAWS shows that animal traders have exported at least five live tigers from Germany, via the Czech Republic, to Vietnam, Thailand and South Korea. Further research in Vietnam shows that at least two of the tigers ended up in the hands of a convicted wildlife trader. Trade within the EU also often leads to serious welfare problems for big cats. In Spain, a zoo named ‘Zooexoticoskiko’ offers wild animals, including tigers, for photoshoots. Even erotic pictures with wild animals can be taken. In some European countries, it is possible to rent tigers for private parties.

Lack of transparency in the EU

Trading tigers from the wild is illegal in the EU, but trading tigers which were born in captivity is not. Legislation and enforcement have serious shortcomings. In addition, the exact number of tigers kept and traded in Europe is unknown, because transport within the EU does not require any CITES (Convention on International Trade in Endangered Species) import and export permits. As a result, there are hardly any official documents that prove who is selling tigers, when, to whom and for what purpose.

Tigers and lions are under pressure from the trade in traditional Asian medicine. South Africa maintains a controversial export quota for 800 lion skeletons, which was based on cherry-picked research and questionable deductions. This quota increases the pressure on living and other endangered big cats, by stimulating the demand for products from big cats. Different laws apply for tigers and lions and for animals born in the wild and born in captivity. While it is almost impossible to distinguish bones from lions and tigers, or to see whether the animals were born in captivity or in the wild. In this way, legal trade can act as a cover for illegal trade.

FOUR PAWS started a petition that helps people call on the European Commission to ban commercial trade of tigers born in captivity and thus protect endangered species from cruel exploitation. 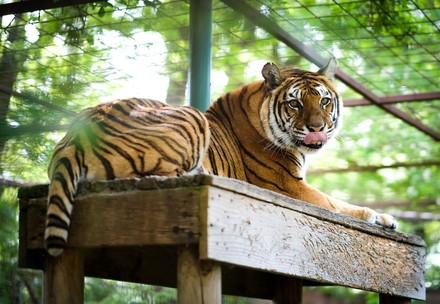 Find out more about FELIDA 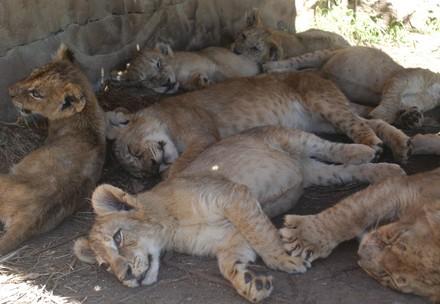 There are a lot of cubs on breeding farms, all without their mother